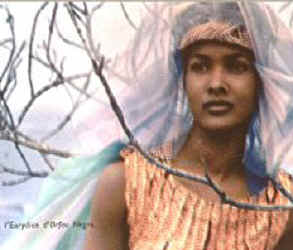 According to mythology, Orpheus was the son of Apollo and the Muse Calliope. He was a poet and musician with whom many legends are associated. It was said that Orpheus could play the lyre so well that he could charm wild beasts and even make trees and rocks move with his music.

He married Eurydice, who was a nymph of the forest. They loved each other very much but one day she was bitten by a snake and died abruptly, leaving Orpheus inconsolable.

Orpheus went down to the Underworld to recover her and by his music induced the goddess Persephone and the ferocious guard dog Cerberus to let her go. They allowed Eurydice to return to earth on the condition that Orpheus not look back until both had reached the upper world. Orpheus agreed but when they approached the world of the living, he forgot his promise and looked back. Eurydice immediately vanished and was lost to him forever.

Later, when Orpheus was thinking of his love, meditating and playing music, a band of Thracian women who were were jealous of his love for Eurydice tore him to pieces and cast his head into the river Hebrus.

The director of this movie was Marcel Camus. It took the Greek myth of Orpheus and Eurydice and transported it into the tropical setting of Carnaval in Rio de Janeiro. The idea for it came from the Screenplay by Vinicius de Morais.
It was made in 1959, and received the grand prize at the Cannes Film Festival. Bruno de Mello and Marpessa Dawn were the main actors.

I now own this movie on DVD and it's even more beautiful than ever. I was in love with Marpessa Dawn,the gorgeous actress who played Eurydice,I thought she was an angel.