A man and the extension of his soul: his drum 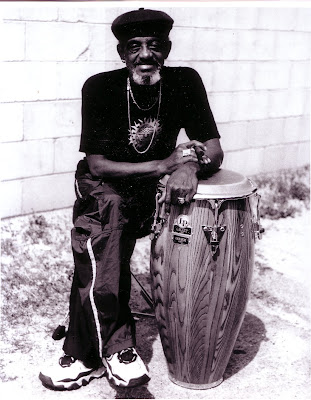 Photo: Gayle Nicholls
People write eulogies and obituaries when great people pass away. Tonight I spent some time staring at what remains of a great musician with an always buoyant spirit. There, in that coffin, was the physical outer shell of a man whose boundless musical spirit could never be contained.
After I cried, I was overcome by the feeling that Victor Pantoja, world-class drummer, was gone and gone far away from that physical form that he once inhabited. His body was there before me but the musical soul that once animated it had already left this planet.
Death is the ultimate equalizer for every living being on this planet. Though death will always be the great unknown, maybe it is life that is the ever greater mystery. How does this giant personality emanate from this empty vessel of skin and bones?
Ultimately, the answer just doesn't matter because great artists or great contributors to this human life leave their contributions behind for us to cherish and enjoy for eternity.
Victor Pantoja was indeed one of those great contributors.
He contributed his rhythmic brilliance to numerous recordings. He gave his part to Herbie Hancock, Dizzy Gillespie, Machito, Santana, Azteca, Malo, Freddie Hubbard, Joe Henderson, Willie Bobo, Cal Tjader, Hubert Laws, Nat King Cole, Sammy Davis, Cab Calloway and countless many others including me.
There are only two types of people that walk this planet; those that give and those that take.
Those that take will live in infamy, those that give will live forever.
My friend was a musician and his musical contribution will live forever.
Bendiciones Baba!
Please Listen to my Memorial Tribute Podcast to Victor Pantoja.
Posted by Rasheed Ali at 10:12 PM No comments: