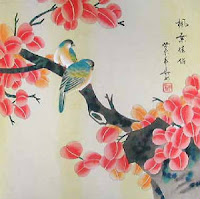 This week's Special Beijing XXIX Summer Olympics Podcast celebrates the music of Asia. It also gave me an opportunity to reflect upon a wonderful musical experience I had a few years ago, when I performed at the LA Gourd festival with Yan Fu Xing.


I first met Yan Fu Xing ("Bird Uncle") on the opening night of the 2004 Gourd Fair LA festival. He is a phenomenal Chinese musician and Vice-President of the Huludao Island Folk Artist Association. Huludao Island hosts the only annual gourd fair in China so he was the 'cultural emissary' of the Chinese delegation. Yan was accompanied by a retinue of Chinese officials at the opening night fundraiser. When I followed his brief performance with one of my own, the Chinese officials were fascinated by my berimbau and gourd drums. The flashbulbs were flashing as Yan and I exchanged indigenous instruments afterward. I gave him a guiro and shekere I had made and he gave me a beautiful traditional Chinese bamboo flute. He had never seen a guiro or shekere before in his life. I felt as if I was representing the entire African Diaspora when I explained the traditional instruments to Yan's interpreter. Sometimes people make assumptions about what is or isn't common knowledge. When we take the chance and reach out to one another, we can share deeply.

The next day, Yan mesmerized the audience with his energetic traditional Chinese flute playing. When Marcel Adjibi and I took the stage, the Chinese delegation was electrified by the intricacies of our traditional West African rhythms. You could see on their faces that these people from Northern China had never witnessed this kind of drum energy before. the crowd was very excited when Yan Fu Xing joined us on stage for our final song. It was an exciting blend of African-Caribbean-Chinese improvised music! I wish someone had recorded our jam that day in October of 2004.

ABOUT YAN FUXING “BIRD UNCLE” Mr. Yan Fuxing is one of China’s most acclaimed folk musicians and artist. Since his youth, he has performed songs on the finger whistle, and imitated the calls of birds. He is skilled in flute, cow horn flute, the xun (hollow wind instrument), the gourd zither and more than 40 Chinese musical instruments. Not only has he performed on the 3.6 meter long flute, but he can also play on the tiny 3 cm bone flute, the shortest in the world. He can converse with birds, and is thus dubbed Chinese Culture’s Remarkable Man; children refer to him as “Bird Uncle”, “Multi-skilled player of flutes”, “Bird king” and other flattering titles.

Here is an absolutely great story I found about Yan from a Chinese news article:
"The Man Who Can Chat With Birds"

Posted by Rasheed Ali at 2:22 PM No comments: