My War Against Eurocentric Academia 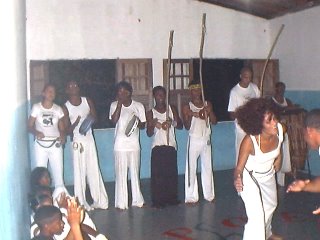 Firstly, I teach the origins of the 'berimbau' everyday. Most recently at Occidental College.
I have constructed 'berimbau' and I have spent hours listening to their music in Brasil and South Africa.
The "berimbau" is only one ethnic group's representation of the world's oldest musical instrument. The one-string musical bow. It not only "predates" capoeira it predates the drum, the flute and all other instruments. It was most likely derived from a bow & arrow used by hunters. It is found primarily among the people of the southern portion of Africa; southward from Angola through Namibia to South Africa. The so called "Bushman" or Khoisan have several versions.
When I was in South Africa to lecture at Stellenbosch University I became quick friends with a music professor who is writing a book on the indigenous musical instruments of southern Africa.
She shared with me her many primitive 'berimbaus' and 'quicas'. She has also gone out into the Kalahari Desert and taken video of Khoisan using this very ancient instrument. I felt as if I was transported back in time by this truly aboriginal instrument.

I am constantly at war with western academia's assertions about the world's oldest society:Africa because every shallow European viewpoint is assumed to be expert and sacrosanct.
To state that the berimbau predates the art of capoeira therefore is to state the obvious. To say that it wasn't "introduced" to capoeira until the late nineteenth century is misguided intellect.

To say that the 'berimbau' was "introduced" to capoeira is like saying that the conga was introduced to the rumba.

The historical record proves that the majority of enslaved Africans taken to Brasil were from the area of Angola. The 'berimbau' had already been a part of their cultural expression for countless centuries. In the 'New World' of the Americas, the Africans ability to express the full lexicon of their cultural expressions was limited by their position in white society. Very little of the African's true identity was expressed openly upon his arrival in the Americas. We were not an 'immigrant' group we were a kidnapped group!

The capoeira master's (Mestre Accordeon) statement: "The exclusive use of the Berimbau to make music with no relation to Capoeira is like using an authentic Samurai sword only for pruning the back yard". is a statement of great dignity.
It reminds us that everything that the African preserved was inescapably tied to a spiritual code. It is a cornerstone of African principle that is the core of the African's cultural survival.
His statement is very clear; if you want to practice capoeira then it must be performed to the soundtrack of the world's oldest instrument, it must always be acknowledged as being a link to the past. In Cuba and Puerto Rico we have the same chatter concerning the Bata drum. The Bata predates the African's attempts to hide his true identity as a Yoruba just as the Berimbau predates the African's attempts to hide his true identity as a Bantu.
Posted by Rasheed Ali at 7:47 AM 1 comment: