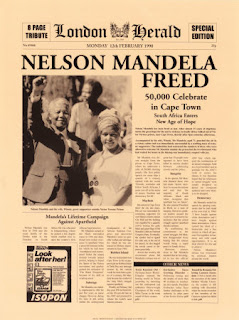 When I visited South Africa in the spring of 2004, a friend took me to the prison gate at Victor Verster so I could take a photograph. I never did take any photographs that day in Paarl.

Much money has changed hands since Mandela left prison behind. I'm sure many tourists paid for the opportunity to photograph the great man's prison cell. I did not pay for such an opportunity.

I did, however, pay a small price for a ticket to see the great man at the Los Angeles, Coliseum where a benefit concert was held in his honor following his release. The Mandela "victory tour" through America was well-attended by those of us who vehemently opposed the racist policies of apartheid South Africa. Over 70,000 people attended that Friday night event on June 29, 1990.

I do not remember his speech that night nor the musical artists who performed in his honor. I can only remember one highlight from that evening.

What I clearly remember is my 2-year-old son raising his fists while he excitedly chanted "amandla". 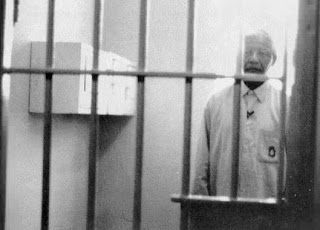 I just found an interesting site devoted to some of Mandela's speeches. Click here to check it out!
Posted by Rasheed Ali at 9:01 AM No comments: