Here is the new 'One Tribe, Many Voices Podcast Player.

Posted by Rasheed Ali at 9:26 PM No comments:

"One Tribe, Many Voices" Podcast Episode 118

9th Edition of Female Voices of the African Diaspora.

"One Tribe, Many Voices" Podcast Episode 117

Female Voices: the 8th Edition in the on-going Series.

A couple of times every year One Tribe, Many Voices will devote an entire show to the celebration of extraordinary Female Voices of the African Diaspora. This 8th edition features the mercurial work of Telmary. 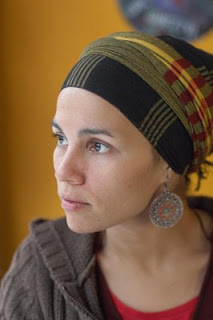 TELMARY has been called "dangerously charismatic" by NOW Magazine. A product of the new 'alternative' music movement in Cuba, Telmary channels a variety of influences including hip-hop and Cuban jazz, from trova and son to latin pop and electronica, she has created a totally unique live presentation that has won over audiences in Cuba, Canada, Spain and Brazil.

We also wanted to take another look at one of Hip Hop's true rebels: MeShell Ndegeocello and her exquisite breakout 1993 CD: Plantation Lullabies. MeShell is an exceptional bass player and overall extreme talent who deserves much wider recognition.

Bonus: I Think it's Better / Jill Scott / Who is Jill Scott?

Posted by Rasheed Ali at 1:56 PM No comments:

"One Tribe, Many Voices" Podcast Episode 116


This week we connect the dots: From Dar Magreb to the Caribbean by way of Andalusia.

The area of North Africa that was dubbed "Dar Magreb" (The West), by those of the Arabian peninsula, is a swath of present day Southern Portugal and Southern Spain that was once known as Andalusia.

For nearly  a thousand years, Andalusia was a melting pot society that had a distinctly African-Berber culture. Both Spain and Portugal were transformed forever by the centuries of Islamic cultural imprint. Today, there are over 10,000 Arabic words in Spanish & Portuguese. The Arabic-speaking Africans brought string instruments, castanets and drums that would forever change the music of these two African border states.

Yet, the people in the northern regions of Spain and Portugal would one day unite and overthrow the Africans in the south. By the year 1492, fortunes had changed dramatically for the Muslims and Jews of Andalusia. That year the Spanish decreed the famed "Spanish Inquisition" that sought to purge Spain of all outside influences from Africa and the Orient. Not coincidentally, 1492 was also the year that a crafty mercenary named Cristobal Colon would buy maps from West African sailors that he would use to "discover the New World". Ironically for the Muslims and Jews who needed to flee from Spain's new Draconian policies, that New World would provide a safe haven for them. Sadly, for the West Africans, those maps would prove to be the beginning of a trade in human beings that would forever change the Old World and the New World. The first enslaved Africans that were transported in large numbers would be those very same Muslims from Senegal, Guinea and Yoruba Land.

If we fast forward to present times, we see that of the Three Sister Islands of Spain's Colonial Empire (Cuba, Santo Domingo and Puerto Rico), Puerto Rico has the most African-Berber cultural traces. One cultural marker can be seen in the (3) pandereta drums. These simple frame drums are not musically prominent anywhere else in the Caribbean. These drums (as seen above) provide a direct link from Puerto Rico to North Western Africa. The Plena rhythm that is played by these drums is the exact same (4)-beat pattern that is played through the Arabic-speaking world.

Today, there are at least sixteen Muslim mosques on the island as a process of reversion to Islam gradually moves across the former Spanish colonies. There is also a growing Palestinian immigrant population that feels right at home on the island.

"One Tribe, Many Voices" Podcast Episode 115 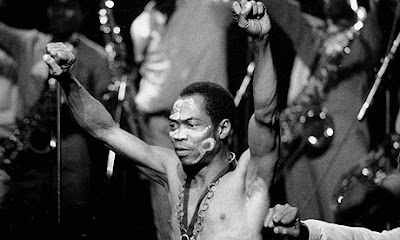 Thanks to a generous donation from my son Rohan Ali, I now own some 45 recordings that were previously unreleased outside of Nigeria.

I always do an annual Tribute to Fela show but this one is special because there are new frontiers to explore with this great African master musician.

Intro: Lazaro Ros, Gil Scott-Heron / The Revolution will not be Televised

Thoughts on Preparing for Episode 115...

As I prepare for my show, sometimes I wonder how much I can explain without separating myself from some members of my audience. After all, the purpose of the show is to celebrate the oneness of the African Diaspora not fragment it. So, I never want to make too many distinctions as far as what I know because I’m a Caribbean member of this Diaspora.

What I wrestle with sometimes is the actuality that not everything that I know is common knowledge. For instance, planning this show on Fela means connecting the dots from present day Nigeria to the legacy of the Yoruba religion and culture. That sounds simple enough in theory but the idea of the Yoruba legacy outside of Africa is so vast and complicated that I realize there is a huge void of understanding between those of us who grew up with these core African themes and those who do not.

Mainland America, with maybe the exception of certain Deep South communities, was successfully purged of the unadulterated African concepts. Obviously, the Africans were not totally de-Africanized but the missing elements that survive outside of North America are pure enough to separate the cultural outcomes of South American and the Caribbean members of The Diaspora.

Just 90 miles separates Cuba from the United States of America but as far as African cultural elements, there is an ocean of separation. The faces in Mississippi, Alabama and Florida are just like the faces in La Habana, Santiago and Matanzas but there is no rumba in Alabama. So, when I think about Chango, Obatalla, rumba and guaguanco I must explain to my audience from North America that African ideas were not a daydream in the Caribbean. The shackles that bound our bodies were the same but the shackles that restricted our souls were not. If I find myself talking a lot about traditional African religion on this show, it’s because it totally shaped our worldview. The drum and the music that it symbolized are not an African influence, as I’ve heard so many educators say, they are Africa!

Who influenced whom? We, after all, represent the first world culture. There is no coincidence that the former Portuguese and Spanish colonies stand out as the bastions of African Cultural preservation. Their proximity to Africa meant they were already unable to resist the influence of Africa. The English, Dutch, Danes, Germans and French were much more resistant to the African’s influence. Maybe, it was merely the affectations of a lack of geographic proximity.

Sometimes there seems to be resentment in some of us, when North and South American Afro-descendents get together. Yet, that which was preserved must be shared by whoever was entrusted with guarding it.
Posted by Rasheed Ali at 9:56 AM 1 comment:

"One Tribe, Many Voices" Podcast Episode 114 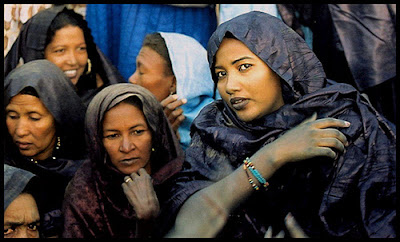