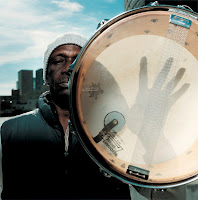 Fela once said that without Tony Allen, 'there would be no Afro-beat!'
When Tony Allen left Fela's band, after thirty recordings, it was said that it took four drummers to replace him! Indeed, I can attest to that fact. When I saw Fela, after his triumphant return from incarceration, he had four drummers! If you listen to Fela's recordings after Tony Allen left the band in 1979 a keen musical observer will notice that something is amiss.

In a decrepit old boxing gym, in a run-down section of downtown Los Angeles, Fela Anikulapo Kuti made his return to the American concert stage and I was there to bare witness.
What I remember most about that evening was the length of it all. The concert began on time at eight o'clock with Fela's band of thirty or more taking the stage and heating things up before the master would appear. It was like a throw-back to another era when Black big bands ruled the dance halls of America. Only this time the trance-inducing sound was direct from the motherland. The rhythm section of multiple basses, guitars and drummers laid down the thick foundation of Lagos funk in that deliberate way that Yoruba music takes its wind-up. Like the uncoiling of a giant snake, it is a gradual liberation of the groove before it pounces on the unsuspecting.

I remember the baritone saxophone as being the anchor and final voice of a horn section that called the spirits to attention. In the best tradition of the Nigerian Obas, the horn section played a royal fanfare that introduced Fela and his brides. Like some tinkering scientist he tinkered with his Farfisa organ, his tenor saxophone and a traditional drum. He conducted and waved his hands to punctuate musical passages and he danced to inspire the rhythm section. Once he seemed pleased with the amount of heat produced by his band's "engine room," he waded into the fray with fiery eloquence. He would imitate the British colonialist and the post-colonial Nigerian elite with the diction of the Queen's English then strike back in the pidgin of the masses.
His raw voice would call to his brides in Yoruba and their high-pitched choral answer propelled the music into some swirling critical mass. The air in the arena, now combustible, only awaited the infusion of his sharp-edged horn section. The human explosion that was Fela's stage show ensued with rising horns and the flailing limbs of his costumed brides. Fela stalked the stage with a rage that resembled the possessed. Maybe he was possessed by his demons at that point in his life, having just been released from a long imprisonment. The band played until 2 am that night. He played one song, I think it may have been "I.T.T." (International Thief-Thief), for two hours!

I would see the band twice more before Fela passed away. The next two performances years later, when he was either a bit more detached or just a little tired of all the fighting. His band never failed to reach that point where the spirits are released and the demons neutralized. Fela's musical mastery never failed him on stage or in the studio but his personal demons were many and tragically powerful. When great artist wade into the deep and dangerous waters of politics and use their voice in protest they are never prepared for the brutal consequence of earthly power.
Posted by Rasheed Ali at 8:26 AM No comments: