The Secret of the Drums 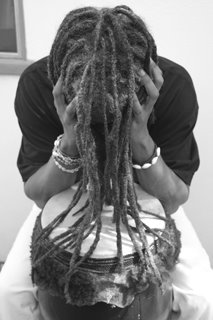 Our colonial masters were never able to successfully take our drums away. In the Caribbean, and in much of Central and South America, our music retained much of its authentic African identity because we continued to play our African drums. We were not forced to create entirely new forms that were largely based upon a European musical model as were our cousins in North America. We had no need to transform classical piano pieces into ragtime. We had no need to channel our African desires into foreign marching band instruments. We had no need to bottle up all of our emotions until they exploded into this thing phenomena called Jazz. We were not relegated to telling our stories with one lonely guitar or fiddle. We did not invent the blues. That is not to say that we did not have any pain. We had pain but we also had our drums. With our drums we retained our African ways of storytelling. Sure, we had to hide our sacred ceremonies but we did not have to change the way we spoke to our God. We did not have to invent any new forms of praise or devotion. We did not have to hide the fierce power of our rhythms or hide the fertility of our thrusting, suggestive hips. I am not saying that they did not try, as they did in the American colonies, to impose laws that banned the playing of the African drums. I am saying that they were never able to break the code of the secret of the drums.

hear: the secret of the drums
from the cd: thunder in the jungle

Posted by Rasheed Ali at 6:46 PM No comments: