"Bastards of the Party" 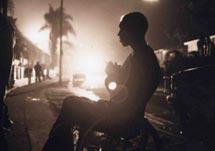 Sometimes a movie or book title can confound or mislead.
When a new friend invited me to see a screening of "Bastards of the Party" I was both confounded and misled by the title of this documentary movie.
Though I didn't have any preconceived notions about what journalistic stance the movie would take on Los Angeles street gangs, I didn't like the title. Maybe I assumed that I wouldn't find any redeeming qualities in a film about L.A. 's Bloods and Crips. As an educator, I am no stranger to gangs having worked with incarcerated youth throughout Los Angeles. I always felt that street gangs were a misguided criminal fraternity that was killing our inner cities. This film goes further in depth than any documentary I've ever seen on this subject.
Maybe the brilliance of this film owes to the fact that it is directed by an insider, a Bloods member. The film neither condemns nor glorifies the ethos or pathology of gang-banging but it explains the history that has heretofore escaped the vision of outsiders. I never knew that the gangs ever had any political affiliation or revolutionary agenda. This documentary opened my eyes to the political perversion of the Black Nationalist movement that created L.A.'s infamous street gangs. This film illuminates a necessary missing link in our African-American history, it should become required educational material for one and all. After you see this film, the odd title makes perfect sense to you.

Bastards of the Party is the award-winning HBO documentary which traces the history of black gangs in Los Angeles. The film, directed by non-active Bloods member Cle "Bone" Sloan, provides viewers with insight into the complex and compelling history of the Los Angeles based Bloods and Crips.

This is a chance to see the film before it runs on the HBO network early next year. Also, lookout for the film's companion book to be released by One World/Ballantine in March 2007.
Posted by Rasheed Ali at 9:17 PM No comments: