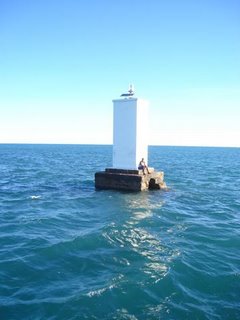 In the middle of the Bay of All saints, a young man finds a place to escape.

A quiet place to contemplate away from the teeming city of Salvador.

Home to the largest population of Africans outside of the African continent, Salvador is a treasure trove of African culture and traditions. By 1850 the city's port had received an estimated 3.5 million enslaved Africans. The wealth they generated enriched Salvador, Brasil's first capitol city.

The institution of slavery was not abolished until 1888 in Brasil. Today in Bahia, the most African of Brasil's states, Afro-Brazilians make up 80% of the population. Afro-Brazilians hold nearly half of the 35 Salvador city council seats but have only been elected to 3 of 63 positions in the state legislature. A growing consciousness among Afro-Brazilians has led to many political initiatives, including a slavery reparations movement.

Posted by Rasheed Ali at 3:49 PM No comments: