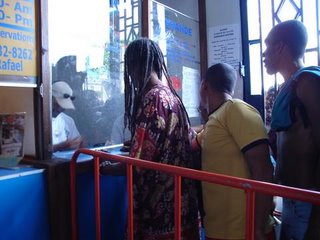 Travel is great but coming home is the defining moment of any trip. While I was away for 3 weeks my backyard suffered the neglect of my absence. It is now a brittle mass of dying grass.
Without the life giving potential in every raindrop, we have a barren landscape. My backyard reminds me that I am important. My backyard reminds me that I am the caretaker of a small eco-system. When the rains are few and far between it is me who provides for the life in my garden. Without my presence, without my assistance and my persistent love and care, my garden died.
Listen: Let it Rain

Posted by Rasheed Ali at 3:17 PM No comments:

A Very Cool Human Being 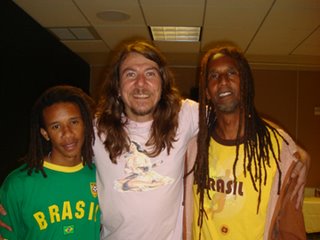 My son Kareem and I backstage with Lenine.
One of the great musicians from the musical city of Recife, Brasil.
Thursday August 3, 2006

When I saw Lenine's concert in Brasil, I was amazed at the devotion of his fans.
The audience sang every word of all his songs.
His deeply poetic words echoed through the concert hall.
I became a fan of his in 1993 when his cousin Ivan shared his first CD: "Olho de Peixe" with me.
I value Lenine's intelligent lyrics and ironic artistic stance but above all; he is a very cool brother!
Posted by Rasheed Ali at 12:34 PM No comments: 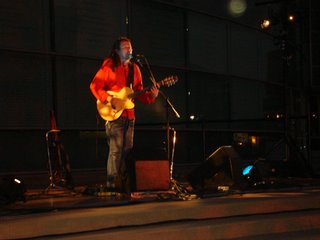 I'm happy to say that I went to Lenine's concert performance here in Los Angeles on Thursday night, August 3, 2006. Though he is a super star in his own country, Brasil, he is virtually unknown in the US.
The singer-songwriter performed without the aid of his talented band.
He courageously performed his repertoire solo and 'unplugged'. Stripped bare to a mixed audience of ex-patriot Brazilian fans and curious Angelinos, Lenine carried his music with a powerful honesty. His inner rhythm was enough to power him. Lenine's ironic poetry was largely lost on an audience of Americans who were clueless to Portuguese but his music was easily felt. I had many funny thoughts running through my mind. As I usually do, I thought about the caricatures that govern people's perceptions. Being a "world musician" makes me especially sensitive to the issues that surround music that is not mainstream in the US. If anyone came to this concert because they expected to hear samba they were deceived by their own preconceived notions of Brasil and its culture. Lenine is somewhere between a rock star and a pop star in Brasil but when American's think of Brasil their minds wander in the direction of sexy samba dancers and cheerful carnival songs. This notion of cultural caricature never escapes my psyche because old stereotypes never die. Carmen Miranda was the Brasil of the 1930's and 1940's for Americans. In the 1960's it was Astrud Gilberto and "the girl from Ipanema".In the 1990's it was Pharrel and Snoop surrounded by a bevy of Rio's beauties. The movie 'Cidade de Deus' helped to shake American's out of their stuppor but the rediscovery of Bossa Nova threatens to return their perceptions to some other Brasil that barely exists. When I was in Brasil to compose music for my CD 'Tristeza e Beleza na Cidade Negra', I listened to the radio a lot and went out to a few concerts every week. The popular music of Brasil is diverse but the traditional music of this vast country is even more varied. Their are many regional styles that are lesser known outside of South America, so much culture to offer, it is a shame that Brasil's music is marginalized by static perceptions. It reminds me that many of my African friends must still field questions about whether they have skyscrapers and city streets on the continent. Maybe the "backward people" are in America.
Posted by Rasheed Ali at 8:19 PM No comments:

Somewhere along the way I wondered if I had strayed from my own mission for this blog. Then I absolved myself of any guilt by coming to the realization that my mission has always featured education prominently. My creative desires have always been fueled by my by quest for knowledge. History has always been my passionate pursuit. My inclusion of information about great scholars and historians is not tangential but intrinsic to my artistic mission.

I have sat through lectures by Dr. John Henrik Clarke & Professor Runoko Rashidi. The energy that flows from a greater knowledge of the collective African Diaspora infuses my work with confidence. I know that I am part of a continuum of African artistic expression.

Runoko Rashidi's work on the Afro-Asiatic historical connections led me compose the song:
The Lost Tribe .
Posted by Rasheed Ali at 2:19 PM No comments: