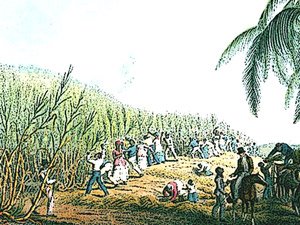 There is this continuing myth about the enslavement of Africans in the tropical Americas.
This fallacy persists that we island people were 'the happy slaves'.
I have seen the old Eurocentric lithographs that depicted swaying palm trees and cheerful Africans scurrying about.
Among African-Americans in the US there is this perception that island people had an easier time in their servitude. There is this idea that we escaped the brutality and the horrors of captivity and enslavement.
A few months ago I posted photgraphs that I had taken in San Juan's Museum of African Heritage. Shackles and grotesque torture devices of every sort were on display to remind us that the cruelty of the colonizers crossed every European border.
The eternally radiant disposition of our Caribbean people does not owe itself to any historical leniency on the part of English, French, Portuguese, Dutch, Danish or Spanish plantation owners.

Posted by Rasheed Ali at 6:52 AM No comments: