If you are an American, you may not know who this man is but elsewhere, in this world of inner city slums, he is a legend. His name is Ronaldo and he has scored more World Cup goals than any man alive. He is a master of "the beautiful game", o jogo bonito, one of Brasil's many gifts to the world.
Not unlike the rhythm and verve of Samba, Brasil's version of futbol (soccer) is not easily duplicated or mastered. Have you ever wondered, as I have, how a samba dancer could create the polyrhythmic syncopation of shifting feet, swiveling hips and shimmying shoulders simultaneously? Once,in Brasil, I stood behind a girl trying to scientifically figure out how she was able to execute three separate but related rhythmic patterns at once.
Samba coordinates the rapid movement of shuffling feet with the sensual side to side sway of hips without disturbing the joyous freedom of shaking shoulders.
In Brasil, physical expression is a way of life for many people.
It is not uncommon to see older people doing strenuous activities, many people are fit and strong.
The beautiful samba dancers that have captured the imaginations of people far and wide also have the incredible stamina to samba through six days of non-stop carnaval.
These are same lithe bodies that interpret the deadly force of capoeira (Brasil's martial art form) as if it were a harmlessly delicate ballet. Many times I have stood in awe as I watched men and women choreograph their spinning kicks in the capoeira school.
I had that same feeling of wonderment when I watched pick-up soccer games in Brasil.
How could so many young men be so physically gifted with speed, graceful precision and fanciful creativity. These boys are so comfortable with the ball that it seems as though it is magically attached to the ends of their toes.
My mother would say of me: "he eats, drinks and sleeps music", because it always seemed as though my every thought and action was a rehearsal for playing music.
I am reminded of this phrase when I watch a great athlete with the tools of his trade.
As a young man who spent every waking moment practicing my craft and handling my tools, musical instruments, I can always spot 'that' kid. Only the soccer player who ate with his ball on his foot, who slept with his ball in his hands and drinks from the well of constant devotion to practice can do what Ronaldo and Ronaldinho (below) can do. The magic is in the time spent with their craft.
Unfortunately, in Brasil many young men have plenty of time on their hands.
One day it dawned on me that these boys were young enough for school but were not in school. Some were just old enough to work but they had no place to work. For them and for many such future Ronaldos and Ronaldinhos, there is more than enough time to dream of a life away from the desperate favelas or shanty towns that ring the outskirts of many urban centers.
The rest of the world has the same problem and unfortunately the same meager solution; give boys the dream of stardom in sports.
On the concrete playgrounds of Chicago's Cabrini Green housing project the next Dwayne Wade
eats, sleeps and drinks basketball. Somewhere in some rundown part of London, Paris or Naples some poor kid is dribbling a soccer ball on his foot while another kid in Santo Domingo tosses a baseball in the air. All of them dreaming of a perfect life after the beautiful game. 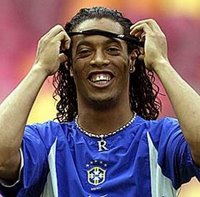