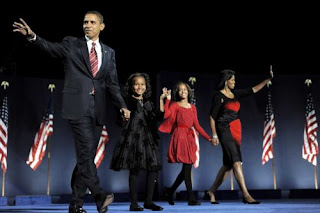 Yesterday morning, November 4Th, 2008, I awoke early with the knowledge that the election polls would open at 7am here in California. I drank my coffee in record time and I made it to my local election polling place by 7:30am. There was already a line of anxious United States citizens assembled. When it was my turn to enter the voting cubicle, I called for assistance because I was new to the process. I had never voted in an American election. I had never felt compelled to be involved in the process of selecting anyone for presidency of the United States. I was one of those jaded residents of this country who did not feel represented nor did I care. After all, I was only a hyphenated American: Caribbean-American, African-American, Latino-American, West Indian-American....but certainly not simply "an American".

I never felt that America was a place of permanence for me. I felt I was only here on borrowed time, to become successful and return home to the Caribbean like my parents did. I thought that voting was something for the 'real Americans', for the 'Yankee People'. As a musician and as an educator, who has spent years teaching and inspiring vulnerable children, the arc of my life can be described by the definition of 'social activist'. Still, I chose to do my part within an apolitical context.

Many Caribbean people have been activist from the moment we arrived here. Black pride or pride in our African roots was never something to be ashamed of, we had no choice! Our music and our food and our outlook was and is very different from that of "regular Americans". When we first arrived here in numbers, we changed the landscape of racial pride in New York City and we helped to fuel the Harlem Renaissance with a new breed of intellectuals. We simply had no choice but to bring our true selves and our true outlook. Yes, we were Black and Brown people but we didn't come here to "mind our place" and pay heed to America's racial traditions. We brought a new viewpoint embodied in immigrant arrivals and first-generation Caribbean intellectuals and political leaders like Arturo Schomberg, J.A. Rodgers, Claude McKay, Malcolm X, Shirley Chisholm, Stokely Carmichael, Charles Rangel and even Louis Farrakhan.

In fact, it was NY congresswoman Shirley Chisholm who was the first African-American major party candidate for the presidency of the United States in 1972.

Barack Obama gave me a reason to be involved in a way that I never thought necessary. I donated money to a political campaign. I attended a local Obama organizing event. I sent e-mails and I told everyone who would listen, including the readers of this blog, that he was a uniquely positioned individual who could make a difference on the world stage.

As a student of history, who had listened to the great Dr. John Henrik-Clarke speak at a lecture hall in Hunter College, I shed tears for all of our African people who died before this day of redemption. Barack Obama led me past my own jaded view of America to a feeling of urgency that I should finally participate fully in the American dream. I am still a hyphenated American but I am one who voted for Barack Obama for president of the United Sates!

Yesterday, my oldest son, Kareem also voted for the first time in his young life but he already has reason to believe in America's "better angels".