"One Tribe, Many Voices" Podcast Episode 106

If you haven't heard of the animated Cuban feature: "Chico & Rita" you need to go out and see it by any means necessary! It has to be the most incredible work of art I've seen in quite some time. I'm not sure how many people know about this indie film but it resonates in the same way "Black Orpheus" ("Orfeo Negro") still resonates for me.
"Chico & Rita" is a subtle slither of Afro-Caribbean culture captured on film, a chance for those of us of the African Diaspora to see ourselves portrayed lovingly as cartoon characters. How cool is that? Ironically, it embodies roughly the same time period as "Black Orpheus", which was released in 1954.
"Chico & Rita" presents a window to a long-ago, pre-revolutionary Cuba. It is so rich in the subtleties of Afro-Caribbean culture that you forget you are watching an animated, cartoon reality. I cannot say that I've ever seen anything quite like this film, I've instantly installed this it among my All-Time Favorites.
Like "Black Orpheus", it is the power and presence of the music that carries this film deep into your psyche. Identical to "Black Orpheus" in that it is a love story that features a musician as the central character. In this case, "Chico & Rita" goes one step further since Chico is a pianist-composer and Rita is an evocative singer and his muse. Go see this film or buy it, you will find yourself falling in love with these richly tinted brown cartoon lovers. 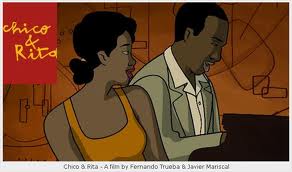 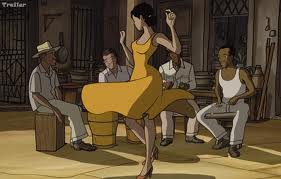